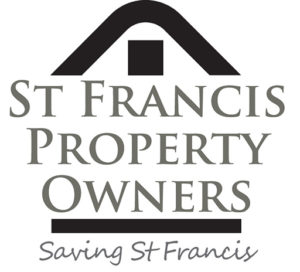 The name of the Association is the St Francis Property Owners Association, hereafter in this Constitution to be referred to as “The Association”

2.1        To promote, either alone, or in co-interests of ratepayers and residents of St. Francis Bay.

2.2        To work in collaboration with the local authority, acting on behalf of its members and in all matters affecting, either directly or indirectly, the interests of the St. Francis Bay Community.

2.3        To co-operate with other organisations in the promotion of amenities for religious, social and recreational purposes in the area.

2.4        To do all such things as, in the opinion of the Executive, may fall within the scope of any of the above objects, or which may be deemed necessary for the advancement of the Association and/or the community it is designed to serve.

3.1        Membership of the Association shall be open to any owner or part-owner (including a buyer or buyers under a signed contract of purchase) or resident of a property in the vicinity of St. Francis Bay and any proclaimed extension thereof.

Corporate bodies will not be entitled to membership, but may appoint two of their members to membership of the Association.  The terms “owner” and “part-owner” shall include the husband and wife as the case may be, of the owner.

3.2        There shall be no ballot for membership, but all persons entitled to become members shall be admitted on application to the Secretary on the official application form, accompanied by payment of the subscription.

The annual subscription per member, or for a husband and wife together (where applicable) shall be determined by the Executive Committee annually.  Subscriptions shall be payable on application for membership, and thereafter at the start of each financial year on 1st October. A member whose subscription is in arrears shall forfeit all rights of membership, and his/her membership shall cease, but without prejudice to his/her right to make application for reinstatements as a member at any time.

5.1        The affairs of the Association shall be conducted by an Executive Committee, which shall consist of nine members, of whom not less than six shall be resident in St. Francis Bay, and who, at their first meeting shall elect a Chairman and Vice-Chairman and, either from their own number or from the general body of members, an Honorary Secretary and Honorary Treasurer, provided, however that these latter offices may be combined in one person. The nine members of the Committee shall be elected in the prescribed manner (Clause 5.2). Each member will serve for a period of two years following which he/she will retire, although retiring members shall be eligible for re-election.  The Committee has the power to co-opt where necessary.

5.2        Nominations for membership of the Committee to replace retiring members for the following year may be made a minimum of 14 days before the date of the Annual General Meeting. Nominations should be in writing and addressed to the Secretary.

5.3        Any vacancy occurring on the Committee, or in the offices of Chairman, Vice-Chairman, Hon. Secretary or Hon. Treasurer, shall be filled by the Committee, and confirmed at the following AGM.

5.5        The Chairman of the Executive Committee shall have a deliberative, as well as a casting vote.

5.7        The Committee shall have the power to create sub-committees and to define their powers, and to co-opt members to serve on such sub-committees.

The Association is empowered:

6.3        To institute and defend legal action or proceedings in its own name.

6.5        To appoint representatives to other bodies or organizations.

Members elected to the Council of the Kouga Municipality will not be eligible for membership of the Committee, and standing members of the Committee shall resign if appointed to Council.  However, such Council members may attend meetings of the Committee by invitation, to keep them informed and to receive instructions relative to the wishes of the Association on Council matters.

8.3        If, ten minutes after the scheduled time for a properly advertised meeting, whether  General or Committee, a quorum is not present, the meeting shall stand adjourned, and shall be re-convened not more than seven days following the adjourned meeting.  The members then present shall form a quorum.

9.1        The Annual General Meeting should be held annually in December.

9.2        Special General Meetings will be convened on a resolution of the Committee, or on a written request by not less than twenty members of the Association, which request shall set forth the purpose for which the meeting is to be called.

9.3        Subject to 8.1 above, General Meetings shall be held at such time and place as the Executive may decide, provided that in no circumstances may the calling of such meetings be delayed for a longer period than twenty-eight days after the date upon which a request is received.

9.5        Members may be represented at any General Meeting by proxy, but no person other than the Chairman of that meeting may hold more than ten proxies. Forms of proxy shall only be valid for specific resolutions at a particular meeting or at any adjournment thereof.  Only official forms of proxy issued by the Association shall be valid and such forms must be returned to reach the Association before the start of the meeting to which they apply.

9.6        Resolutions for presentation to the Annual General Meeting must be delivered to the Secretary not less than four weeks before the proposed date of the AGM.

This Constitution may be amended, altered or added to at a General Meeting of the Association, provided the Notice of the Meeting shall embody the proposed alterations, amendments or additions.  Twenty-one days’ notice must be given of any proposed amendment, alteration or additions and these must be displayed publically at a suitable place.  A two-thirds majority of votes of those present at the meeting, in person or by proxy, shall be sufficient to amend, alter or add to the Constitution.

An Auditor for the following year may be appointed at the Annual General Meeting in each year.  In the event of the office of auditor falling vacant during the course of any year, the vacancy may be filled by the Committee.

All accounts must be approved by the Committee before payment is effected.  The accounts of the Association for the financial year, which shall terminate on 30th September each year, shall be presented to all members at the following Annual General meeting.

The Committee shall be empowered to impose a levy on members to meet any unexpected expenses of the Association, provided that such levy shall in no instance exceed one rand per member without the sanction of a General Meeting called for that purpose.

The Association shall be a voluntary association with a legal persona, having perpetual succession, regardless of a change in its membership.  It can acquire rights and obligations apart from its members, who will not be answerable for the debts and engagements of the Association.

The liability of any member for the obligations of the Association is limited to the amount of his/her unpaid subscription.

Members of the Committee, and of any sub-committee appointed by the Committee, are indemnified by the Association against all claims and demands of whatever nature that may be made upon them, nor shall they be liable to make good any loss occasioned or sustained by any cause, however arising, out of the exercise or purported exercise of any of the powers conferred upon them in terms of this Constitution; save and except such loss as shall arise from or be occasioned by his/her own personal negligence or wilful dishonesty.

The Association may be dissolved if at least two thirds of its members, present and entitled to vote at a General Meeting, convened for the purpose of considering such matter, are in favour of dissolution.  Not less than twenty-one days’ notice shall be given of such meeting, and the notice convening the meeting shall clearly state that the question of dissolution of the Association and the disposal of its assets will be considered.

If there is no quorum at such a General Meeting, the meeting shall stand adjourned for not less than one week, and the members attending such adjourned meeting shall constitute a quorum.

On dissolution of the Association any balance of funds or other assets standing to its credit shall be ceded to a society of Association having objects similar to those of this Association.